I've travelled in south east Asia before, with a backpack, back in 2009. It's a great place to travel, especially on a bicycle, thanks to it being comprised of quite a few, small, uniquely individual countries. Each with a well developed tourist industry, easy to acquire visas and efficient border crossings. The scenery and food is great and everything is ultra affordable for a westerner, even if they rip you off. It was because I've visited the region before that mine was only a flying visit. Literally, as I even took a flight which wasn't entirely necessary, but which did enable me to catch up with my friend Siri whom I first met way back in Romania. It was a strange feeling to be in an area where I was no longer a celebrity, in one sense it was nice as I was left in peace far more often. But sadly, despite my claims that I have no interest in even minor fame, I felt disappointed at no longer being special. 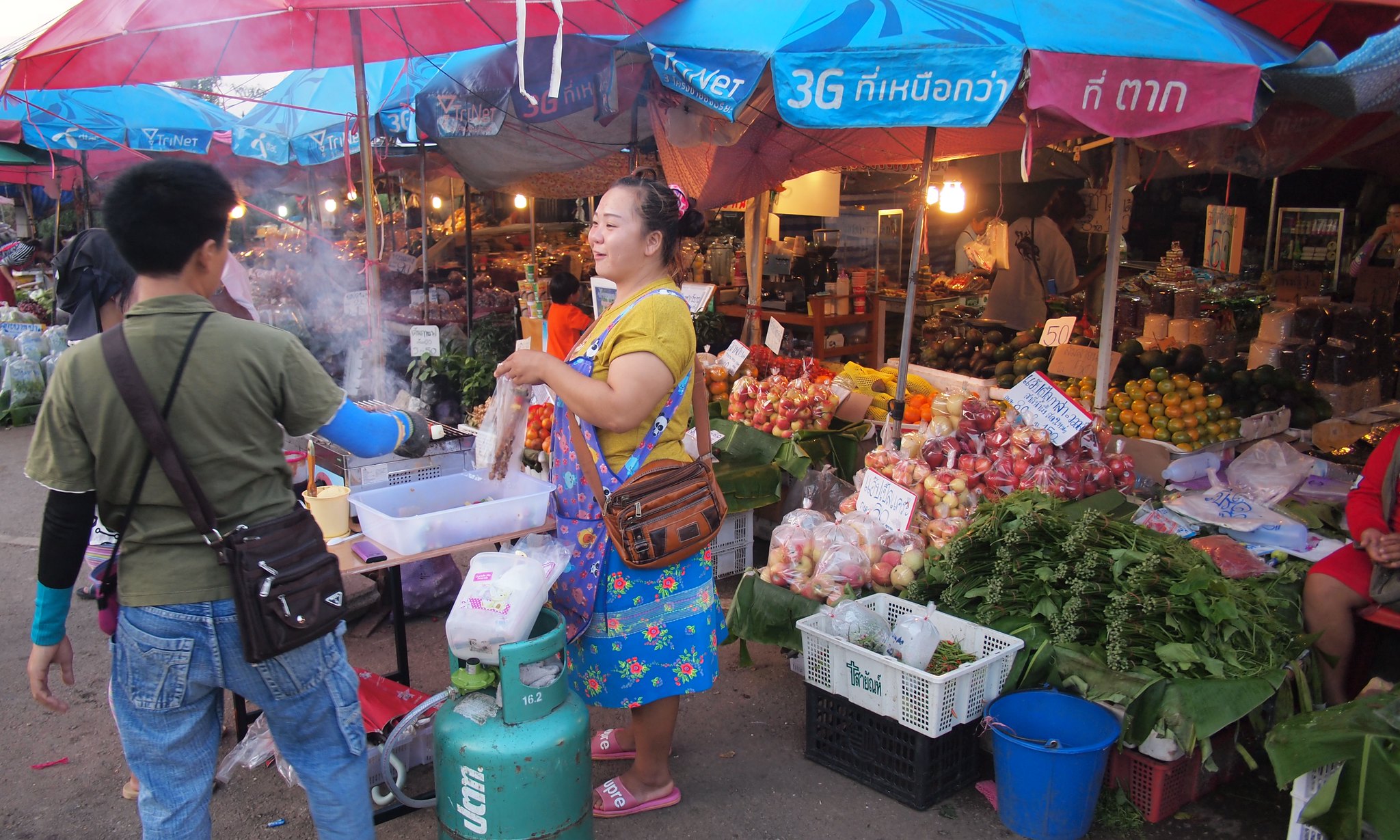 Thailand turned out to be the perfect country to blitz through quickly on bike, unlike Myanmar there were hotels everywhere which would all happily take tourists, their road network is well-funded and bicycle friendly and almost everyone understood the only language I can speak. I did take time to meet up with Linda and Francisco whom I'd first met in Uzbekistan, Coincidentally they were in town at the same time as me so I checked in to their guesthouse on my arrival in Bangkok. Even more coincidentally, Mischa, who we had all also met in Uzbekistan, just happened to be in the guesthouse they had chosen, so the four of us went and visited Khao San Road for a few beers and traded tales of the different routes which had brought us all there. 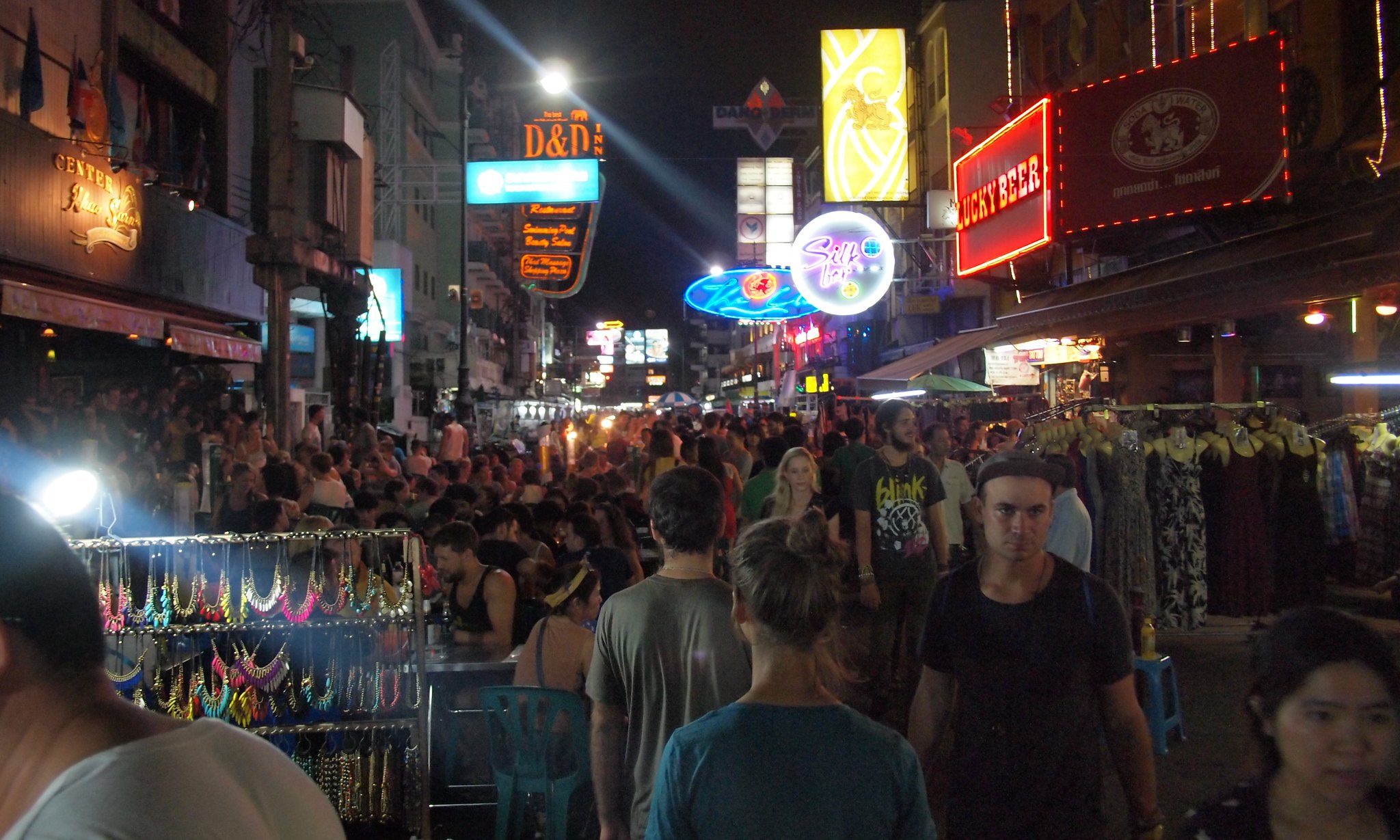 As I was likely to stay for more than 30 days in Indonesia (the next country ahead), I decided to get a visa in Bangkok so I wouldn't have to piss around extending it in Jakarta, or queueing in the airport for an exemption stamp on arrival. Getting the Visa in Bangkok was easy, and took only two days. Although, amusingly, my now nine month old passport photo that I'd been using everywhere was finally refused. Not because it didn't look anything like me any more, but simply because it didn't have a red background. I blame the red background for making the new photograph one of the most terrifying photos of me I've ever seen.

At Jakarta International Airport, my lovely visa was completely ignored. Despite me presenting my passport open on that page AND despite me actually saying “Hi, I already have a visa.”. Instead of being stamped in on my 60 day pre-arranged visa, for some reason, the official chose to opt for a visa exemption stamp. For 30 days. Why an official would ever think somebody WITH a visa would need a visa EXEMPTION was beyond me, and fixing it was far more complex than I could have imagined. To begin with the ministry in the capital wouldn't allow me in in shorts, so the security guard lent me his trousers. Asian trousers on a northern European man turned out to be no different from shorts, but he was satisfied. 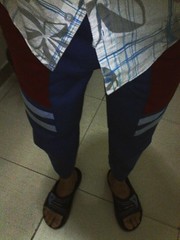 After queueing at the wrong desk and being redirected to a different but equally wrong desk, I was told they could do nothing to fix it and that I would have to return to my port of entry to get a new stamp. I trundled back to the airport and spoke to a friendly member of security who called his mates and told them that they could expect a guy going backwards through the normal one-way system of airport arrival traffic. I swam upstream through security, having to explain my reasons for going the wrong way through to every police, immigration and customs officer I encountered. Even a cleaner tried to thwart my quest. Eventually I got to the man with the stamp and all was made good. 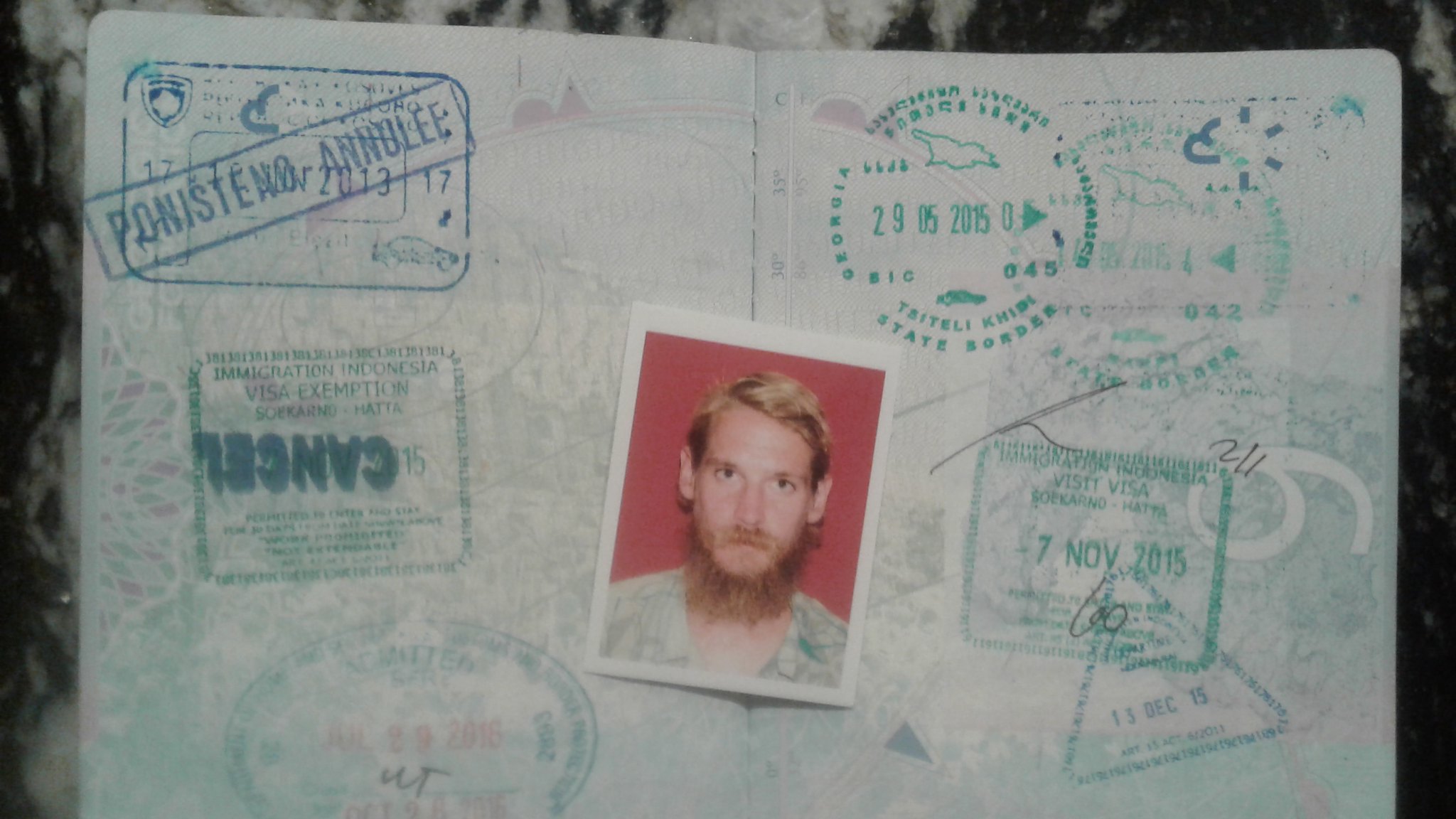 During my stay in Jakarta I assessed my finances, my savings were holding out well, but with over a third of the globe still to go, and that third being in expensive countries, I was not comfortable that I could make it on my budget and maintain my beer intake. It was painful to accept, but I was going to have to interrupt the flow of my trip and get a job in Australia. This was always my fall-back plan as Australia has a working holiday visa for anyone under 31. Three weeks before my birthday I stumped up the cash for it and arranged to stay with the brother of Alex, my riding partner from Uzbekistan.

I left Jakarta and rode for 11 days across Java, my friend Siri taking the easy option and simply flying. Java is really not a picturesque tourist destination, some spots are good, but the majority of the island is salt farms (which was actually quite interesting for someone who had never questioned where his table salt comes from) and a shoreline utterly saturated with waste. Plastic bottles, fishing nets and general household waste all ends up washed against the beaches and is really saddening to see. Somebody told me that Indonesia is the second highest contributor to plastic waste in the oceans. I don't remember who the gold medallist was. 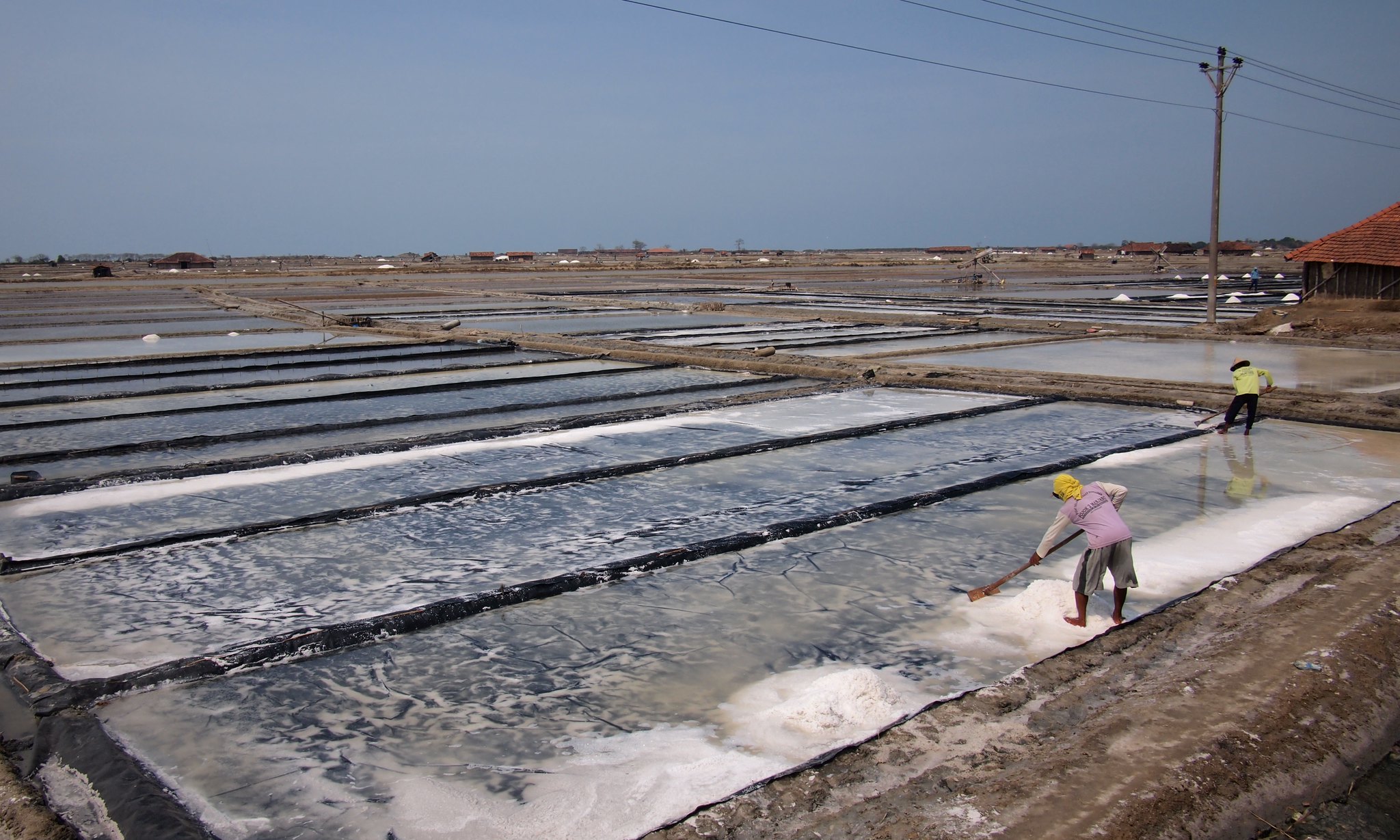 Grabbing the ferry from Java to Bali was really easy and as I was making good time that day, and Siri was already at the hotel, I decided to ride through the night instead of camping. My final ride turned in to a 200km slog to Denpasar, with a tired body and a bike which sounded like it would collapse at any moment, I staggered into the hotel lobby at about 2am and struggled to make coherent sentences at the staff. I showered and slept for a long time, then the next day I stripped and cleaned every inch of my bike (ready for the strict Australian border officials), boxed it up ready for the flight and left everything in the hotel's luggage room. it was holiday time again. 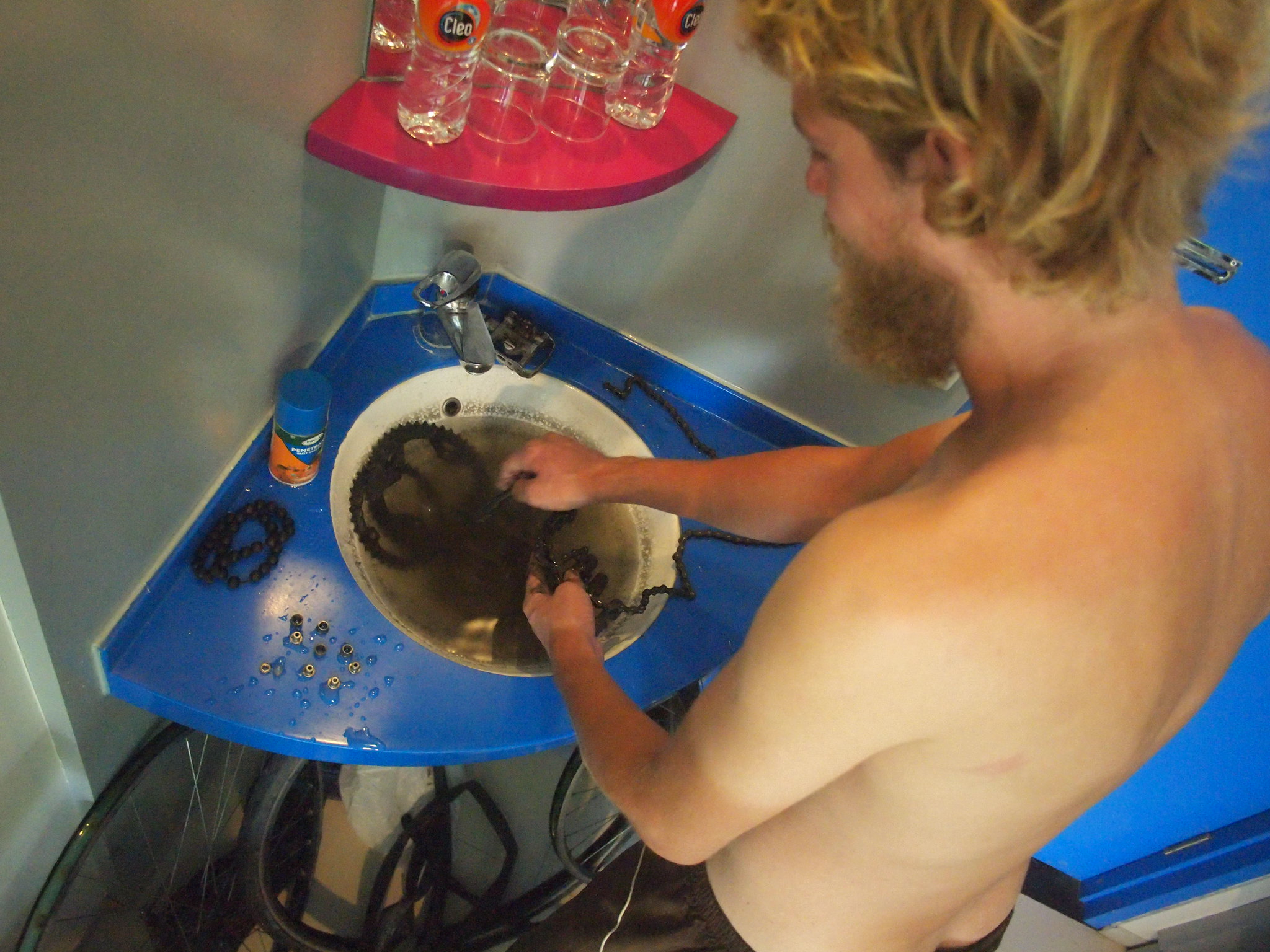 My German accomplice and I travelled around the island enjoying a standard of luxury I was unaccustomed to. Idyllic beach front Hotels with swimming pools, air-conditioning and doors that locked. Meals in restaurants. Almost three full seasons of Dexter. And even a two-wheeled vehicle which required no pedalling. It did however technically require a licence and after getting pulled over for speeding through a red light, I was finally forced to pay my first bribe. One which I fully deserved to pay. The cop was really pleased with his cash bonus and I was reasonably pleased that I didn't have to go to court for a string of offences which, back at home, would have probably earned me the loss of a licence I don't even have yet.

South east Asia gave me good times as a cyclist. The food, the scenery and the well developed tourist industry make it a popular place for cyclists of all skill levels. The roads are chaotic, but it's surprisingly safe especially out of the cities, due to the fact that almost everybody travels on two wheels. I definitely hurried through and I think I will regret not visiting more of Indonesia than just Java (probably by far the least spectacular island of the archipelago). Getting out of the tropics though is something I was massively looking forward to. 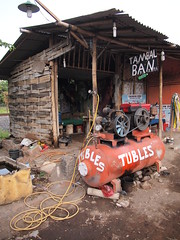 After four months cycling in exhausting tropical climates I realised that I really hate those conditions. The humidity, sweat, sunburn and mosquito bites were wreaking havoc on my baby-sensitive skin and my gear wasn't faring much better. Short, heavy blasts of rain would soak my stuff and the perpetual dampness of the air ensured nothing ever got 100% dry again. This started to cause some of my clothes to literally rot through and almost anything with exposed metal began to oxidise. Thankfully the repairs on my rat-damaged panniers held out and kept them waterproof, although, ironically, I spent most of the time riding with them open so the airflow might prevent my possessions turning to mould.