Ann thumping relentlessly on my door at 2am was not my preferred beginning to my birthday, but I could tell pretty quickly that it was probably somewhat serious, what with the thick smoke already leaking into my tiny cabin. Begrudgingly I opened my door to see my German neighbour attempting to wake everyone in our block with the news that we were probably about to have to evacuate the farm. At this point information was pretty thin and a short-lived debate about whether to stay or go developed. We decided it best to start loading at least our valuables into the cars and figuring out how many of us would fit onboard our limited convoy. 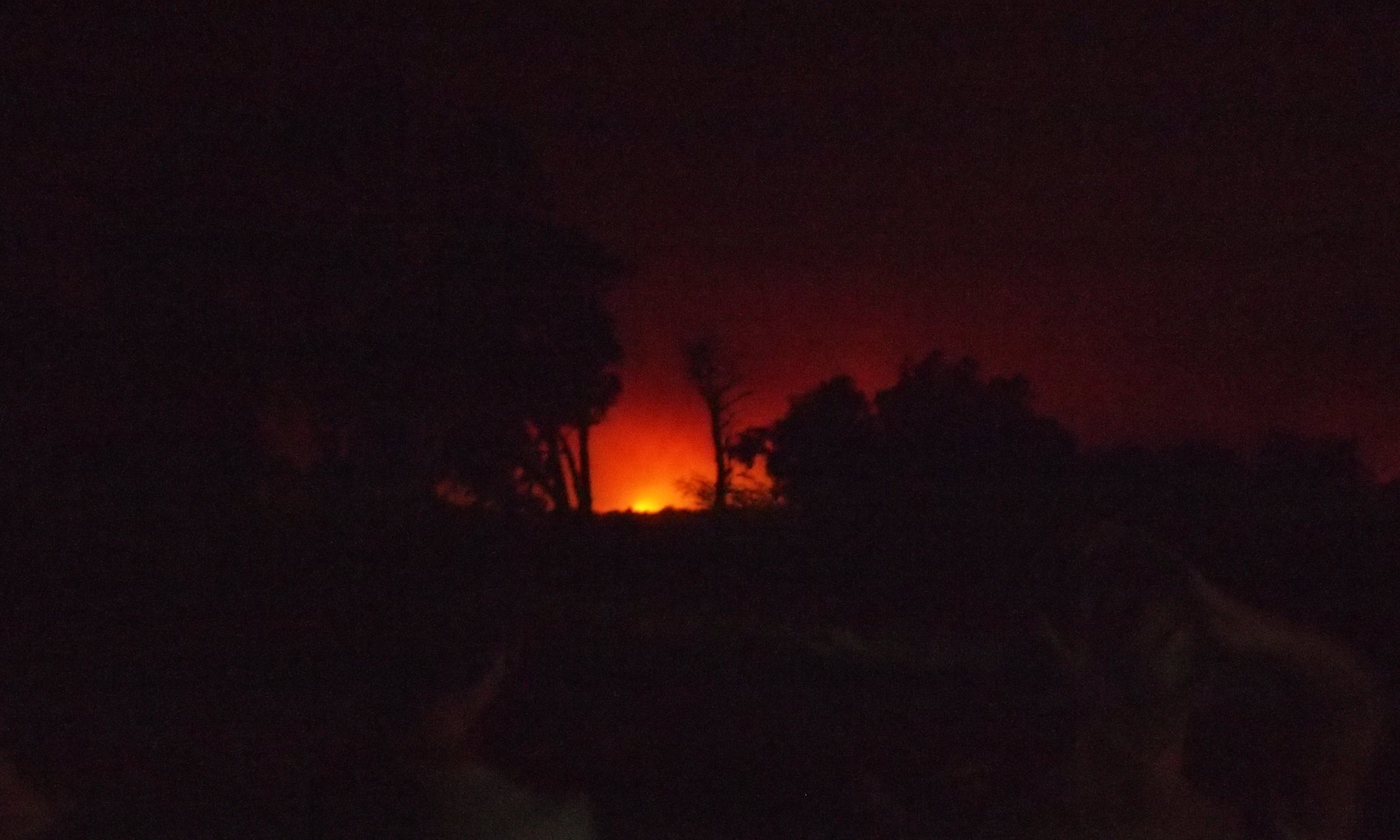 Soon Matt, our mulleted supervisor, rocked up in his pickup and told us that right now the farm was safe, but explained the route to Preston Beach for those of us who wanted to leave. We chose to err on the side of caution and bail, in the German campervan was Ann and Phillip up front and me and an Italian who had arrived that day, sprawled in the back with a load of hurriedly packed bags. The Swede-Kiwi couple led the way in their 'ute'*, a Frenchman had an estate car rammed with Italians and more Frogs brought up the rear in THEIR camper My beloved bicycle remained chained against the wall of our accommodation, having been deemed unnecessary luggage and, under the circumstances, an unsuitable vehicle. 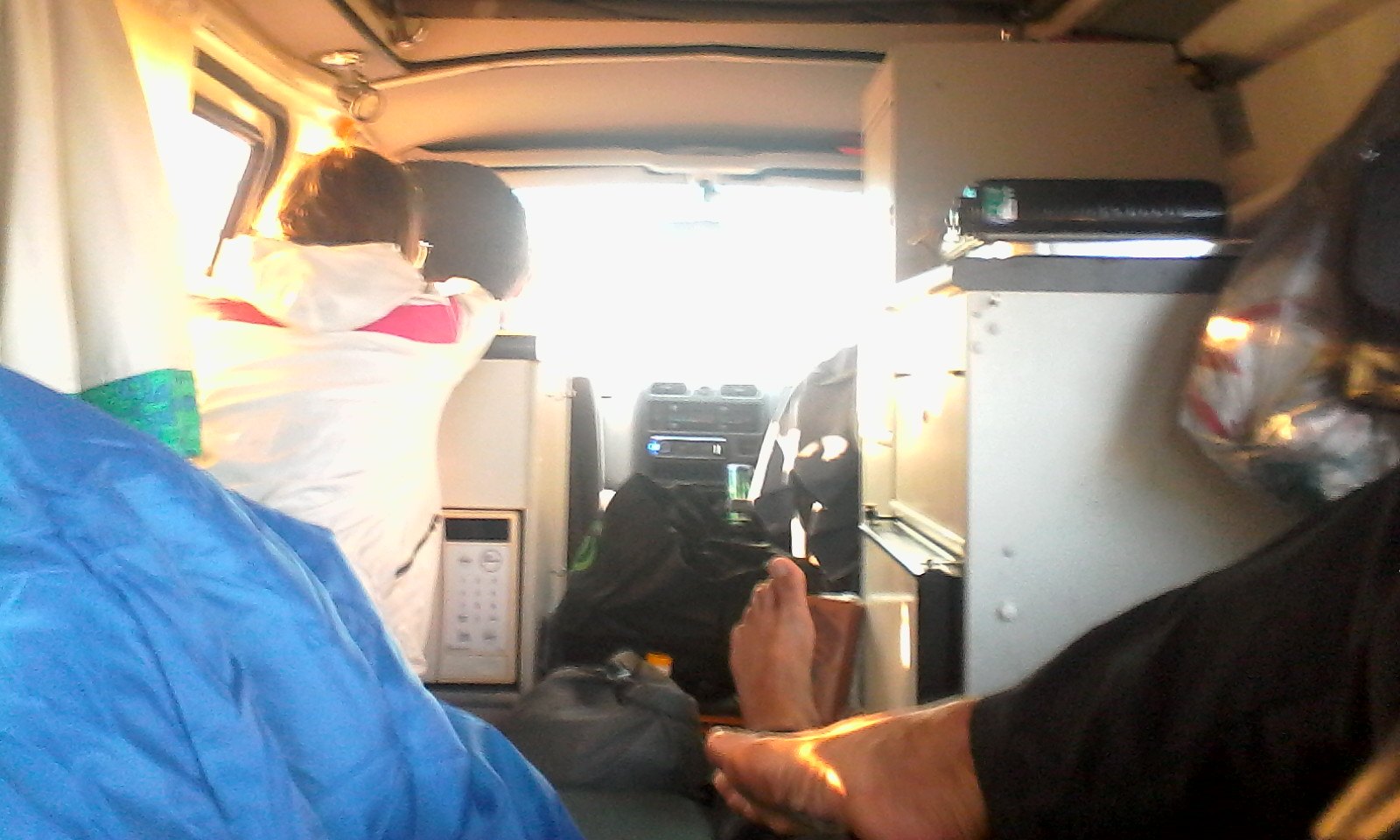 I'd first spotted the signs of a bush fire early in the afternoon, as our boss drove us out across the fields to do some weeding. At first I assumed it was just a cloud on the horizon, but it was obviously spewing skywards from the ground. Later in the evening, everybody on the farm gathered outside to watch on as the orange glow flared brighter on the horizon. Paddy and other members of the management crew were monitoring it and putting out any small fires which blew onto the farm. We went to sleep at around 11, relatively reassured that it wasn't a big deal. I come from a country where it's really hard to start a fire even if you actually want to, so I know nothing of bush fires, I assumed from the relaxed attitudes of the locals that there was no need for concern. But it was only a few hours later when Valentine and Ann were woken up by the smoke being pumped into their rooms by the air conditioning that we recognised that even local knowledge isn't always perfect. 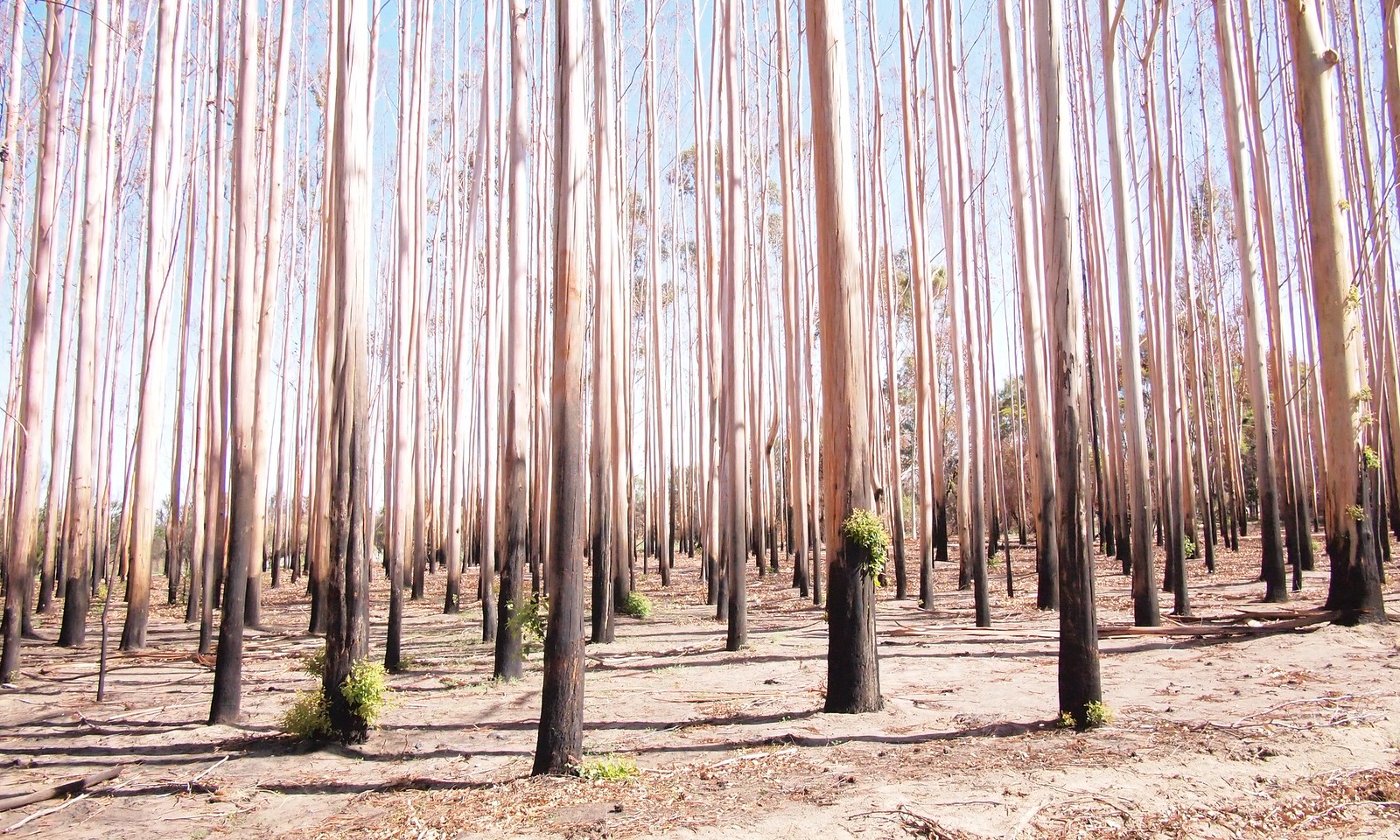 Driving out of the farm we started to see small fires along the roadside that had been sparked from flying debris spread by strong wind. These fires caused us to change route, luckily we had an alternative and even more fortunately, it was flame free. Phillip kept spirits high by (somewhat hilariously for a German) pumping out a fire-related playlist of music and a blast of Happy Birthday when we realised it was indeed now the first day of my 31st year on earth. It took us half an hour to arrive at the beach. 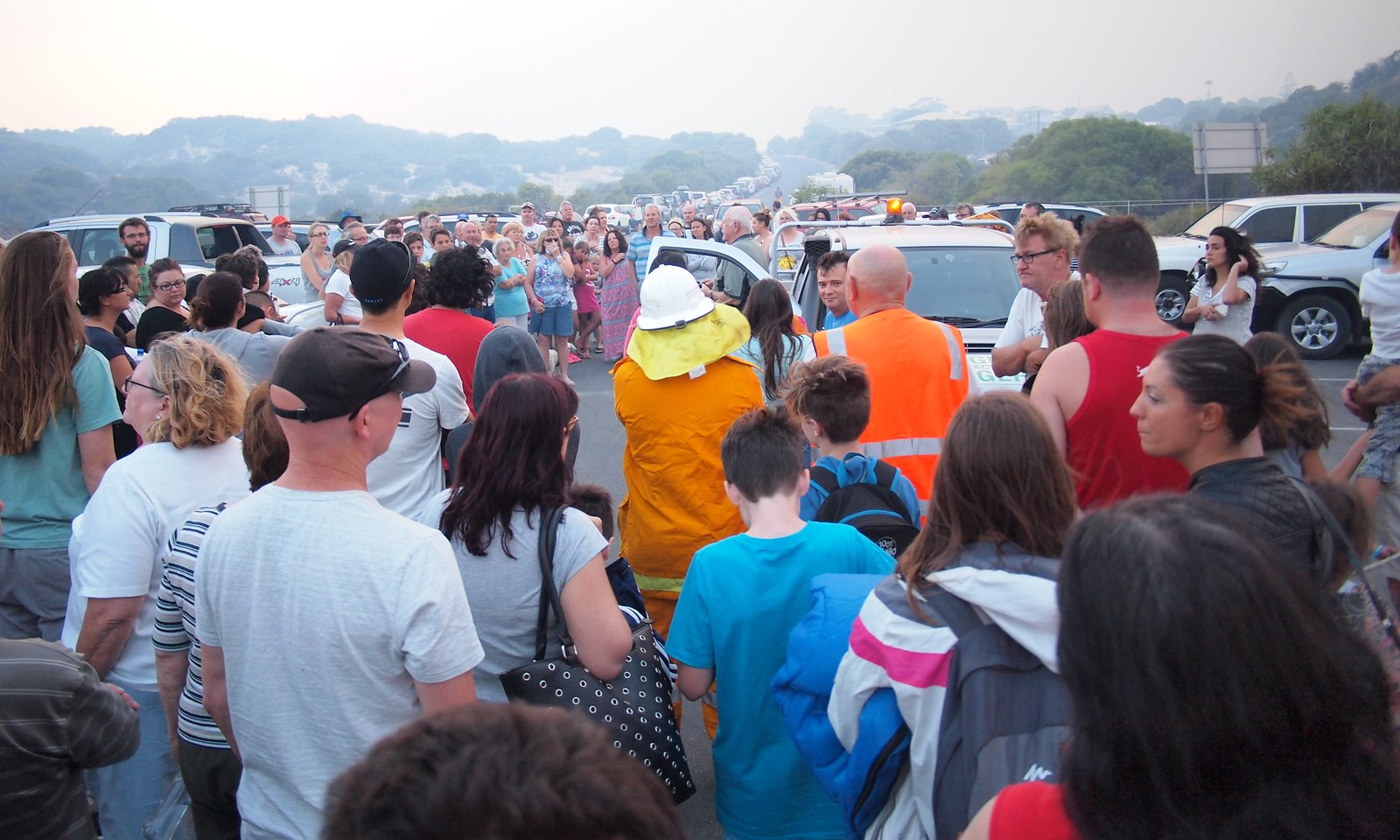 We were the first to arrive into the comfort of the carpark at Preston beach, making me think that as uneducated Europeans we were panicking unnecessarily, but soon enough locals begun to pour in and within an hour it was full. The atmosphere was still relaxed and like back at the farm, I assumed there was no real need to worry. The locals were chatting and drinking wine while their kids played in the playgrounds so Phillip opened some warm beers from a crate in his campervan and we toasted my birthday. Valentine livened things up by locking her key inside her van and Stacey had to use his Kiwi tool skills and a bent car aerial to regain access. Fortunately long before we needed to move again.

Reports changed rapidly from no danger to some danger, be ready to move to the beach itself if it gets closer, to roads closed no exit and then, suddenly to you CAN get out onto the highway and head north out to Pinjarra, where an evacuation centre was being set up. We were assured that the rozzers would open the road block and let us head north. The fire was circling us and moving in our direction, but there was a rapidly shrinking window, within which we could escape. The alternative was to wait at the beach in hopes that the situation would relax, if it didn't boats were being sent to extract people from the beach. We made the correct call again and rolled the convoy back out onto the highway, after a brief fuel scare for the French, who just made it to the petrol station before they closed the doors.

In the third vehicle back, we could tell pretty quickly that the information we'd been relying on was crap, when we saw Stacey's Ute turn right to head south on the highway at the roadblock cop's direction. We in turn were informed that the route north was blocked but we 'MIGHT' get out south. We followed the New Zealander's gamble and sped off into ash and smoke that hung thick in the air.

At about half 6 we staggered through the doors of McDonalds in Bunbury, exhausted and hungry we ordered and devoured trays of filth and decided to head to the beach to camp, convinced that the rangers would not try to extort us for the usual fines, under the circumstances. Having lost 4 of the 6 vehicles in our convoy we parked our campervan alongside the Ute on the beach front in Bunbury, about 60km south of the farm, stretched out my tarp to extend the awning and finally crashed out on the grass under sleeping bags and duvets.

We got a couple of hours sleep, cowering from the sun under our make-shift camp. By mid afternoon we'd befriended Richarrdo, an Aussie, trapped down from Perth while heading to Bunbury for his father's funeral. Due to road closures, only four of his family had made it to the ceremony. Despite this he was in good spirits and offered me a lift to the liquor store to grab some beers for my birthday, I enjoyed a ride in his corvette around town. Soon after the other vehicles arrived and we expanded our camp. The van of the Asians were not seen again, I'm not even sure where we lost them, perhaps they managed to go north to Pinjarra. (EDIT – They got to Perth).

My brilliant new workmates treated me to numerous birthday cakes (including an egg custrad tart; the first I've had in many months) and a melon with sparklers in it. We then proceeded to get drunk. alerts from the internet were somber, phrases such as 'Immediate action required to preserve life' and 'Too late to evacuate' brought the gravity of the situation home for us all. But we had nothing better to do and nothing to contribute, so we continued to drink for the second night. 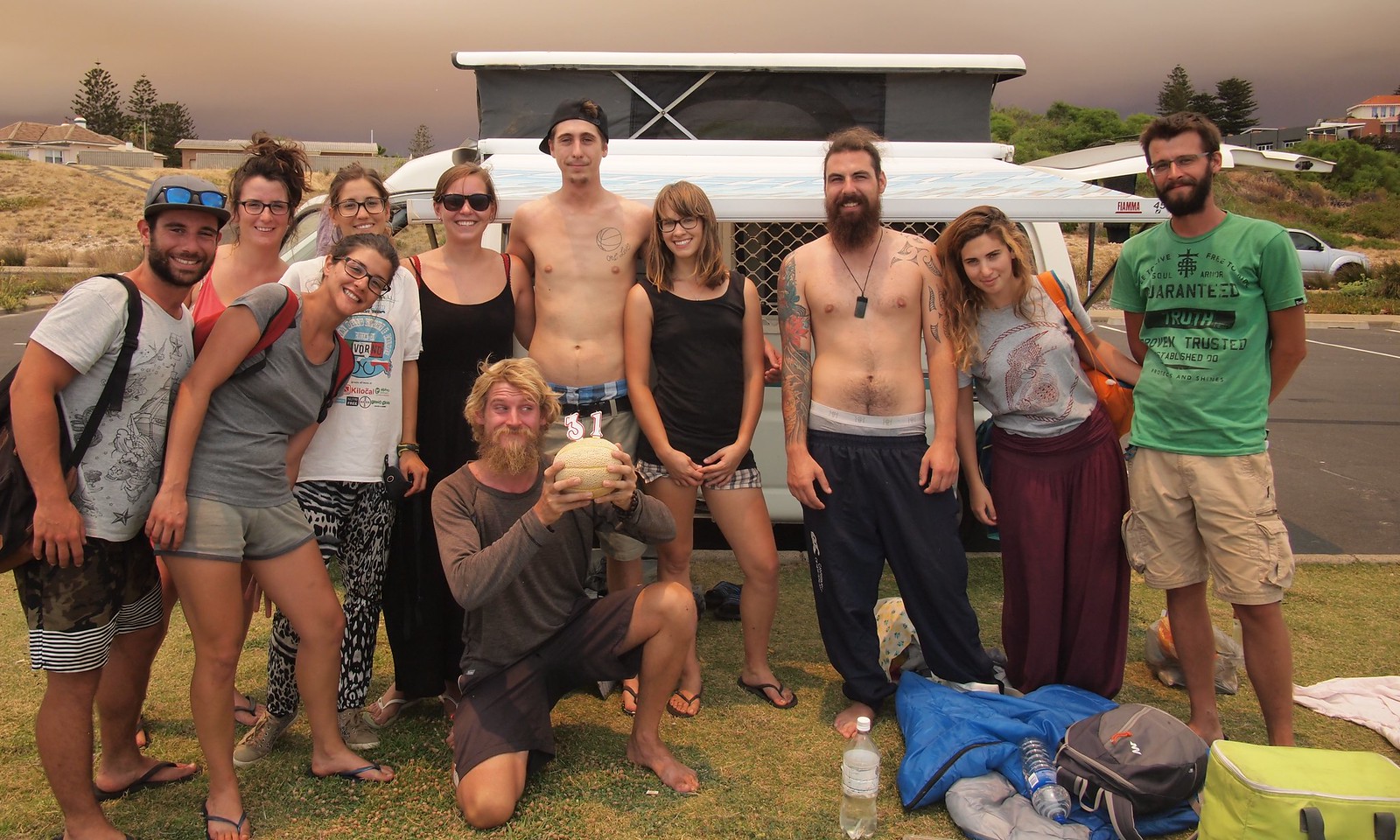 An evacuation centre had been set up south of the blaze by now in Harvey, but not long after learning of it, we heard it itself had been evacuated further south to Australind. We decided that heading back towards the fire was the worst course of action, so we got as comfortable as we could. Local police and rangers were patient and understanding and, as usual, I was envious of foreign law enforcement. By now the entire town of Yarloop had been flattened overnight. Almost everybody had lost their homes. Two people had lost their lives. 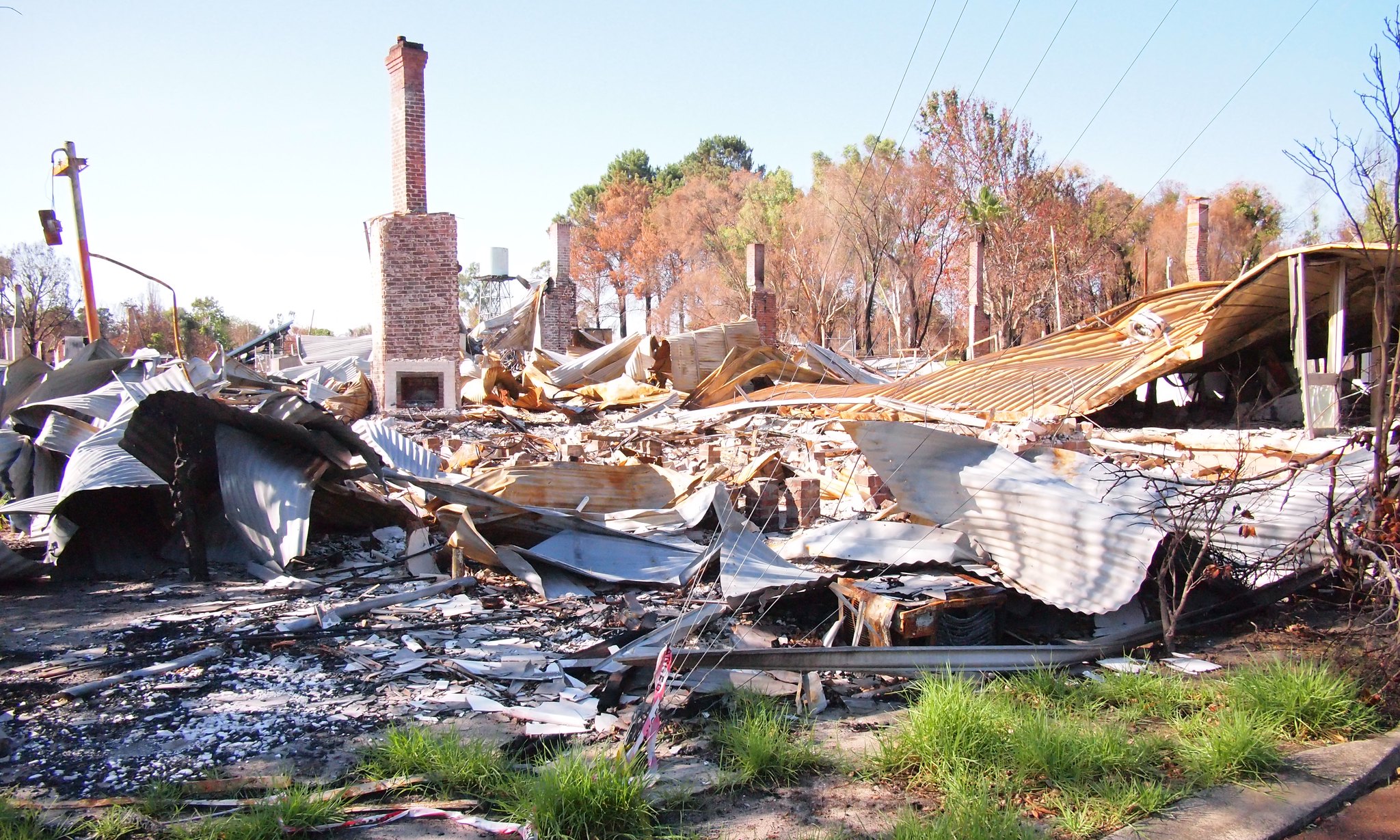 After two nights on Bunbury beach and a mixture of conflicting reports and messages, we began to decide to move on to the evacuation centre, 10km out of Bunbury in Australind. At this point most of our French-speaking companions made the decision to take a 5 hour wide arc around the fire to get back up to Perth to attend a bush party. Unfortunately for the rest of us, this meant losing one vehicle and gaining two more people. We rearranged the luggage in all of the vehicles, squeezed in, said our goodbyes and headed off in opposite directions. 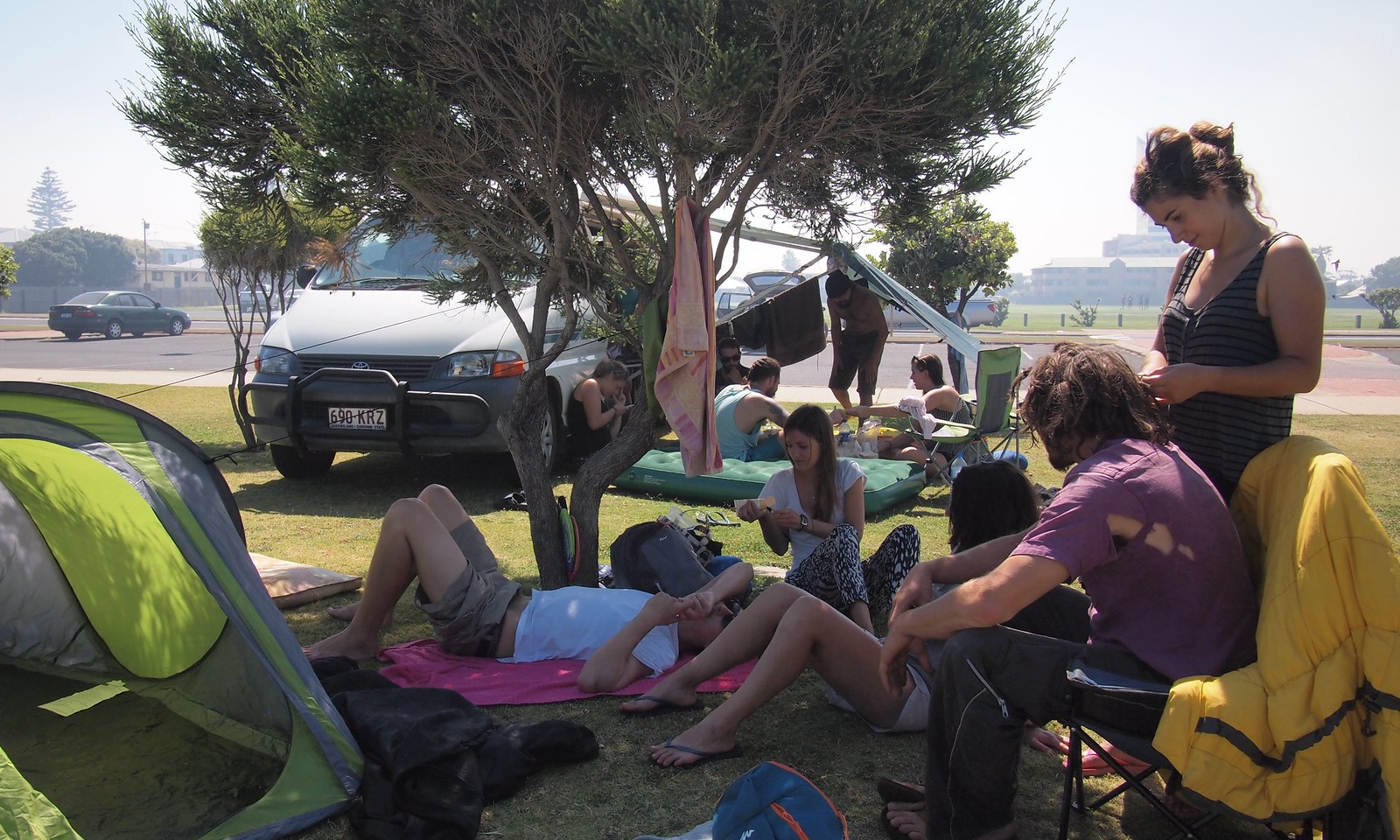 I'd been uncomfortable about going to the evacuation centre and uncomfortable with my reasons for feeling uncomfortable. Although we were genuine refugees, trapped away from our homes and jobs like many other people, unlike some, we had, by now received confirmation that we had homes and jobs to return to. Being around people so heavily affected by tragedy was the last thing I wanted, especially since at best we could be no help and at worst, we could be a hindrance. At about 2100 we parked up at the Leschenault leisure centre in Australind and registered with the fine volunteers from Australian Red Cross. We had coffee, food, water, wifi, airbeds for those who needed it and a sportshall to sleep in. There was also unfettered access to the basketball court and showering facilities. 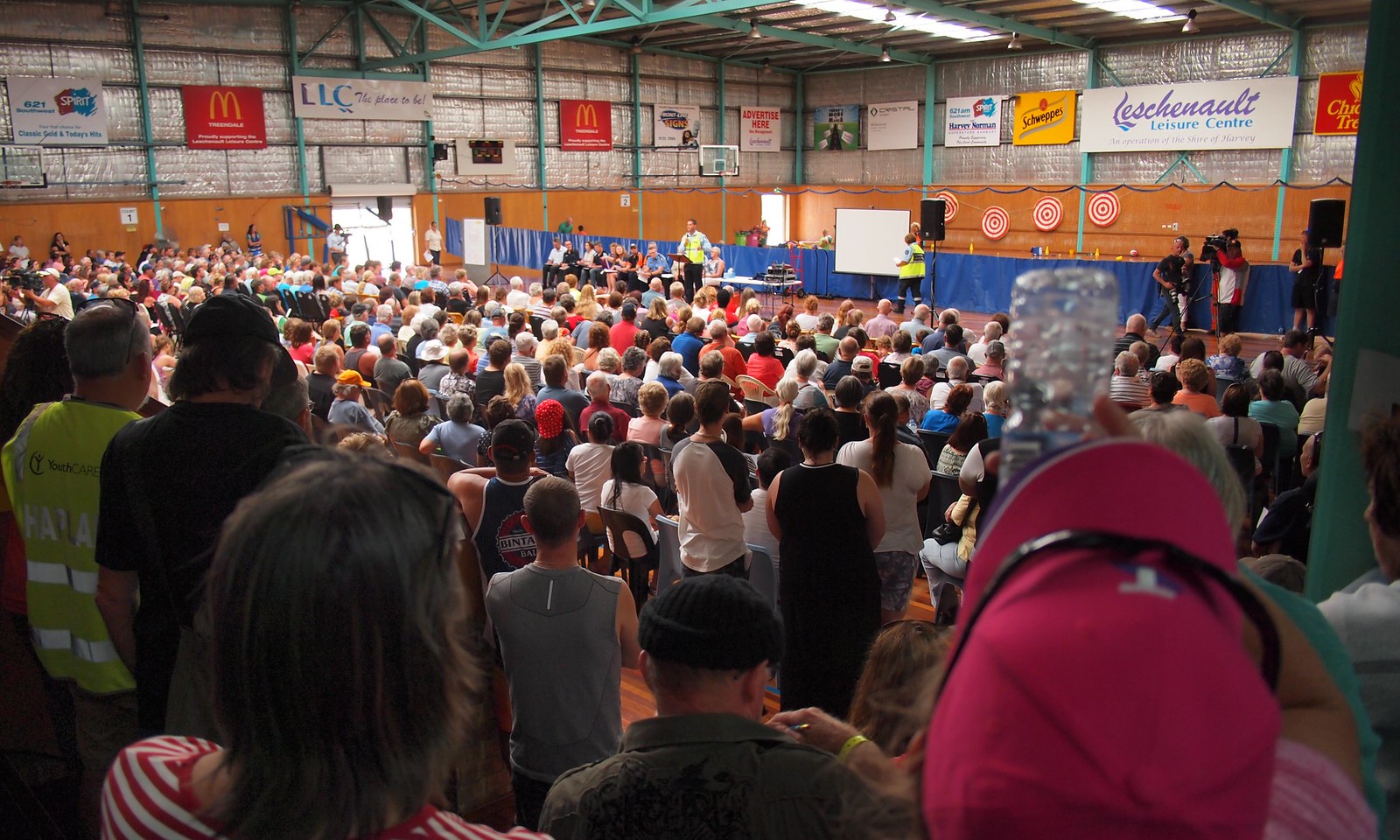 After another two nights in Australind the warnings were downgraded slightly, our boss Bruno took the back roads and tracks around the roadblocks, rounded us up and took us back to the farm. The fun and games were over and shit was about to get serious in our new life as melon handlers. 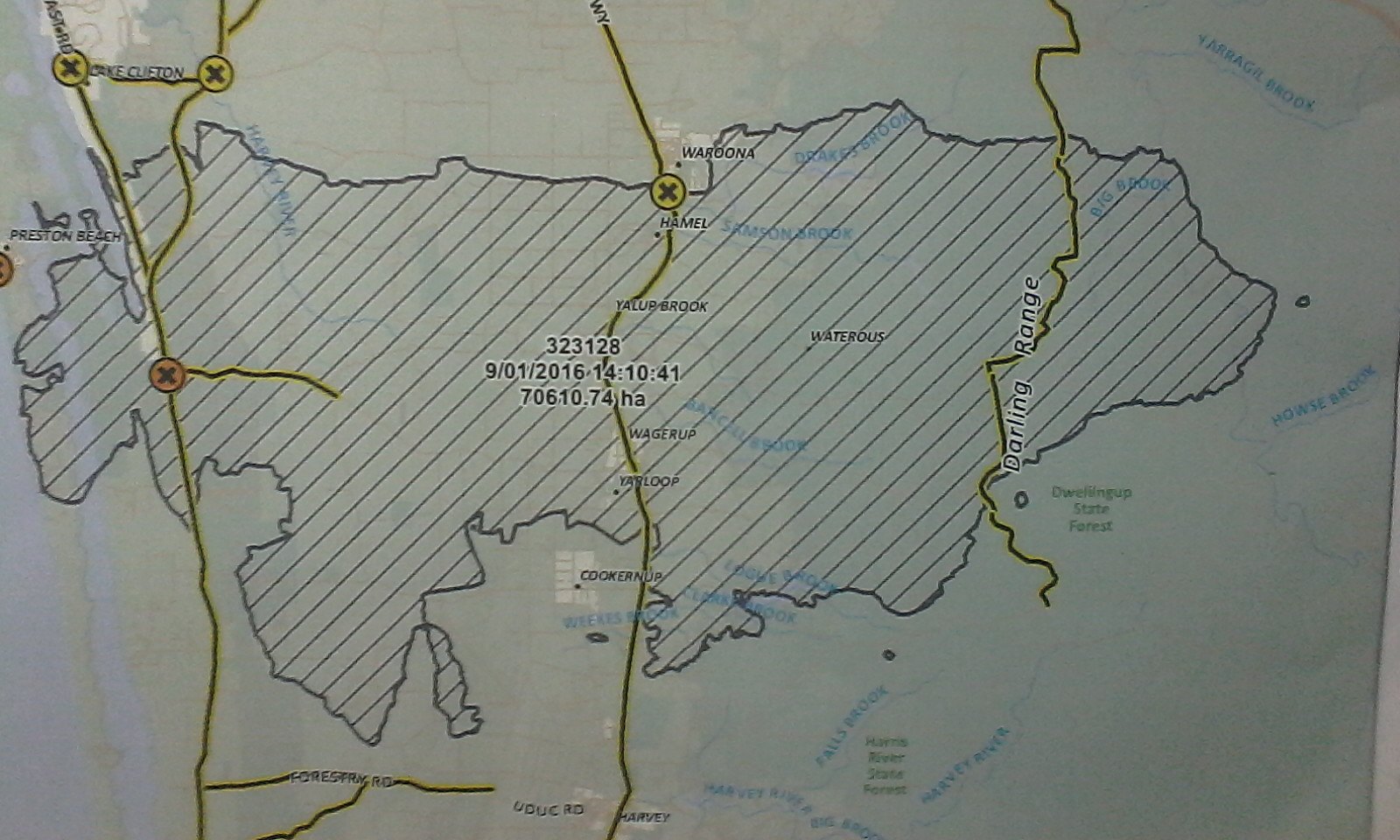