“There's only one good thing about being in the desert; no f**king mosquitoes.”

I'd met John in a hostel in Tbilisi, and again, in Baku, where we stayed with the same host. He's a ginger bloke from the UK that used to be a medic before jacking it all in to cycle the world. When I turned up at my hotel in Nukus, Uzbekistan, his was the last face I expected to see. I took a day off there with him, another British girl who had come on a Vespa (Possibly harder work than a bicycle) and a Swiss couple. On this section of the trip it had become very easy to cross paths with other nutjobs as there is really only one main route through the area and it's popular for all types of travellers. Despite meeting up so often, me and John had not yet ridden together so we decided to head towards Bukhara as a duet, with a brief rest stop in the medieval town of Khiva before a 450km stint in yet more desert. 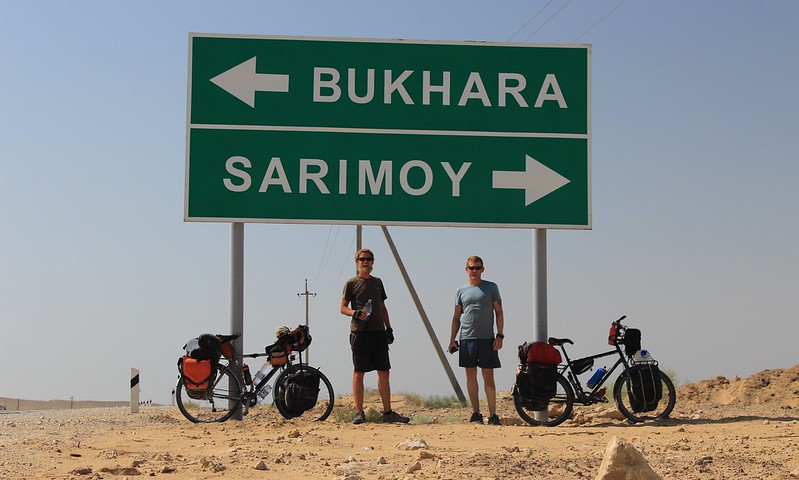 The roads were a conttinuation of what we were both growing accustomed to; battered tarmac peppered with shabby repairs. A thin strip of uneven gravel borders each side but is no good for a loaded touring bike unless you find yourself converging on the same point with two large trucks going in opposite directions. Which, of course, sod's law ensured happened more often than should realistically be the case. As we went on, the road got narrower and car drivers got more impatient with the timing of their overtakes, meaning we spent more time on this horrible strip of bolt-loosening track than the road itself. Luckily the scenery was the most boring imaginable, even if you have a really boring imagination. This meant there was nothing to distract us from our task of staring blankly ahead at the seemingly endless black streak, talking senseless crap and continuously pedalling until it was time to eat or go to sleep. 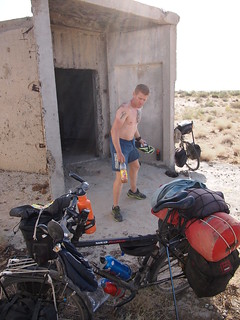 Camping in the desert is normally really easy; you turn off the road, push the bike through the sand for a bit, clean yourself down a bit with some baby wipes or a bottle of water, lay down on the ground and try not to think about camel spiders. One night we saw a concrete structure with an old trailer next to it and decided it would make a good spot to sleep as it would offer us some shade in the morning and a barrier from the wind, should it pick up in the night. This turned out to be the worst camping spot ever chosen, by anybody. Ever. 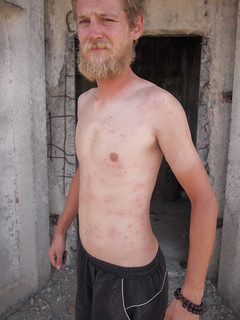 I was certain it had to be something else when the first bug landed on me, but as both of us started to get bitten we had to except that, as unlikely as it was, we'd found mosquitoes in the desert, miles from water. Our casual approach to setting up camp became more hurried; John stuck his tent up (As he always did anyway) and I started rigging up my net while cooking some noodles. As the bites became more frequent our behaviour became more frantic. We both danced about like madmen, slapping at the insects on our bodies (both real and imagined). During one of his crazed dashes John suddenly stopped and raised his hand “Listen”; there was absolutely thousands of them, filling the air with a constant hum of their filthy little, blood-sucking wings. “They must be coming out of there” John suggested pointing at the concrete bunker type building. I abandoned my usual sleeping setup, grabbed my tent and legged it out into the sand. Having set up my tent with it's proper fine-guage bug mesh I jumped in, flicked a few dozen invaders to death and ate my noodles. I was pleased that for once in my life, mosquito bites weren’t causing me instant and unbearable irritation, the level of which normally drives me to the temptation of taking a belt-sander to the afflicted area. 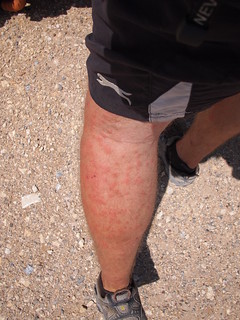 I woke at around 01:00 with normal service resumed, sweating, itching and stressed I attempted sleep with poor results before getting up and getting ready to cycle again. Before we left I had a quick count of my now red, swollen bite marks and a conservative estimate of 300 was reached, although it was hard to tell as large swathes of skin were entirely covered and the welts just seemed to join up into one huge rash. I spent the next few days trying not to scratch and eating Piriton like Smarties. I absolutely hate mosquitoes.

Chaihanas were thankfully now closer together, but our water consumption was enormous so perma-thirst (a thirst so potent it seems impossible to shake with any amount of fluid consumption) became a daily occurrence. Temperatures were now up into the 50's so carrying ten litres was barely enough and we got into a habit of checking the temperature of all our drinks before paying as refrigeration was lacklustre at most stops and our water bottles were always disgustingly hot. One day I frustratingly exclaimed that there must be a way to make our water colder, John's suggestion was simply “You could try boiling it, mate”. He might have been right, I'm sure I've had colder cups of tea. 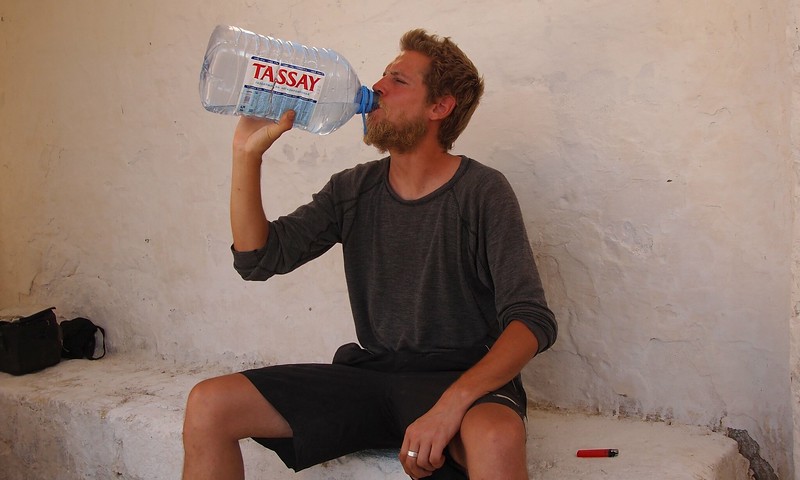 As we counted down the distance to our next rest break, we pushed on for a couple of long days in the hope of finishing early on the final day. The wind had other plans and switched to a headwind to reduce progress to a tough grind. But, sure enough, we rolled into Bukhara at around 14:00 on the Saturday, filthy, tired and thirstier than ever. Luckily, our prediction was bang on and the Swedish, under-25, all-girl cycling team were waiting to greet us with crushed-ice Mojitos.

Either that or we'd finally lost all semblance of reality in the desert.