My bike and luggage arrived in Aktau without a scratch to even her packaging, so I have to hand it to the guys at AZAL airlines and the airports. The flight was quick and in the end the feeling of regret from missing the boat dissipated fast. I could immediately see from the air as we arrived over Kazakhstan just how bleak the next few days would be. Even with the diminishing light at 22:00, I could see bland desert terrain stretching away. I re-assembled my bike in the airport car-park, having explained numerous times that I didn't need a taxi, because I had a bike, that I didn't need a hotel, because I had a tent and that I didn't need money changed, because I already had cash. I chatted with the group of taxi driver / exchange agent / hoteliers for a bit and even let them have a ride on the bike. The real big taxi driver (Second from the right in the photo above) was surprisingly agile on a bicycle. Having brightened up their wait for the next plane to land, I decided to make my leave and rode about 15km into the desert towards the town of Aktau before rolling out my sleeping mat and calling it a day. 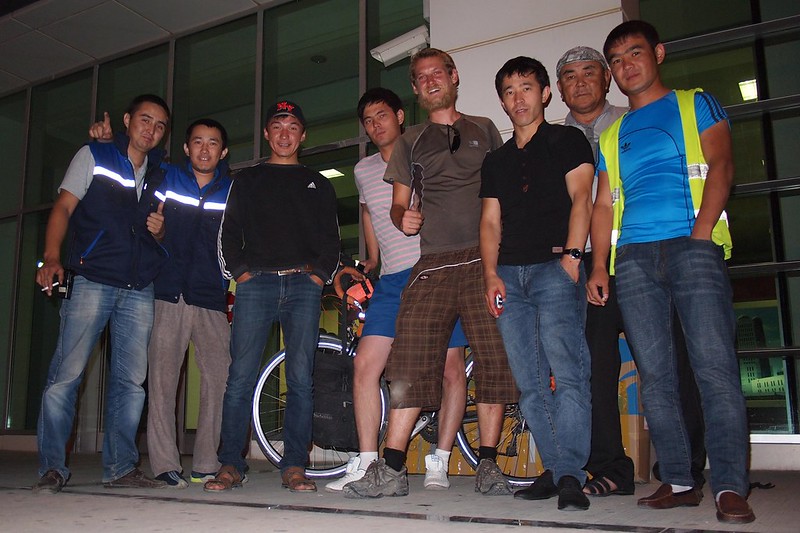 Laying in the desert I had a brilliant view of the milky way, clearer than I've ever seen, even 15km from a town. Because towns here are small with no street-lighting, and the next town looked to be about 80km away light pollution was at a minimum. I'd grown quite frustrated with being trapped in one place and there was an element of nervousness around being deported, but now, free again and under the stars, life was back as it should be. 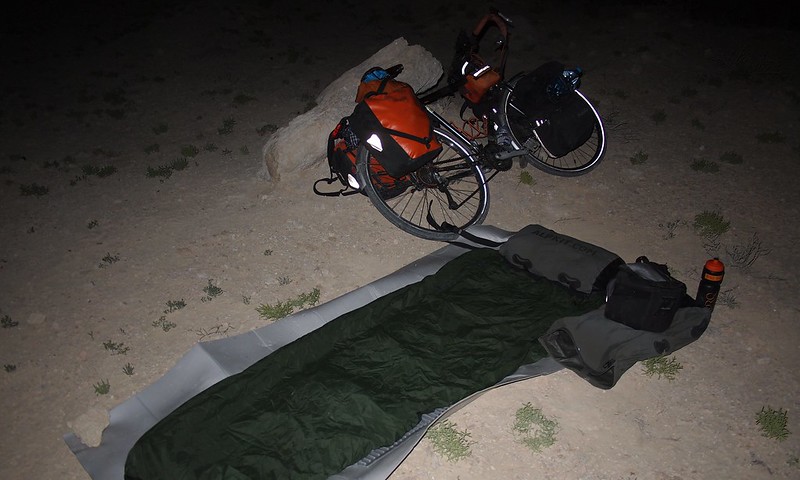 The stretch of road from Aktau in Kazakhstan to the border town of Qarakalpakstan in Uzbekistan is of notoriously bad condition. Large sections of it are in a bad state of repair. Or disrepair. It's hard to tell which. Being as I was one of the last cyclists to leave Baku (Debbie and Eric had quite a collection of us coming through their doors for varying lengths of stay) I had been fed plenty of information from the guys on the road ahead. I'm not sure whether it made it easier or not having this information in mind.

If you imagine your average garden centre car-park, ploughed vigorously, after a meteor shower then buried in an inch of fine, dusty sand, you're getting close. The real treat though is the short sections where it turns into nice smooth asphalt, only for a few hundred metres at a time and only every 5km or so. But just enough to get your hopes up that you've hit a turning point. It's only saving grace was that sections of it ARE currently being rebuilt, and whereas these aren't yet open to cars, the construction workers are happy to allow bicycles to hammer along the virgin asphalt in peace. These sections are few and far between. 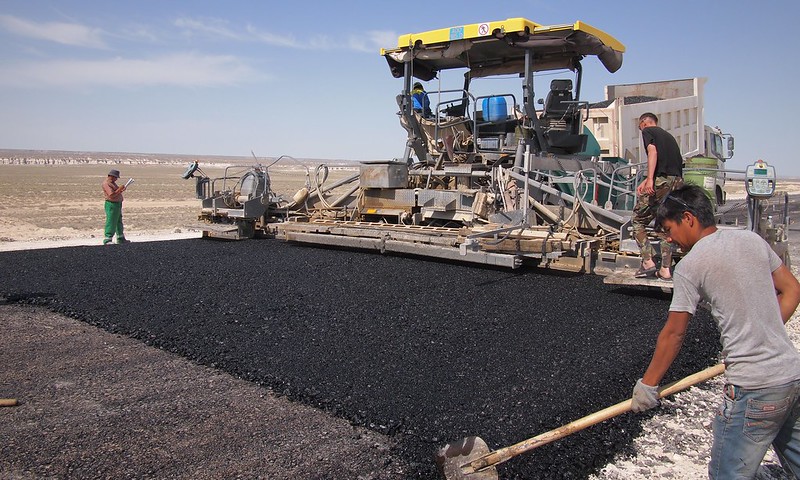 Another thing that are few and far between are settlements, or even shops. Kadir's father, a host of mine in Turkey, had told me about Kazakhstan; "In Europe, 200km; next country. In Kazakhstan, 200km; next gas station!", he wasn't far wrong. Buying food and water became increasingly desperate as the days went on. Chaikhanas (Roadside tea houses) were alleged to be about 50-60km apart but in reality felt a lot further. Motorists would occasionally stop to chat and, upon hearing of my plans, would usually donate a bottle of water to the cause. One man handed me a one litre bottle of ice, I was so happy at this donation I could have cried. 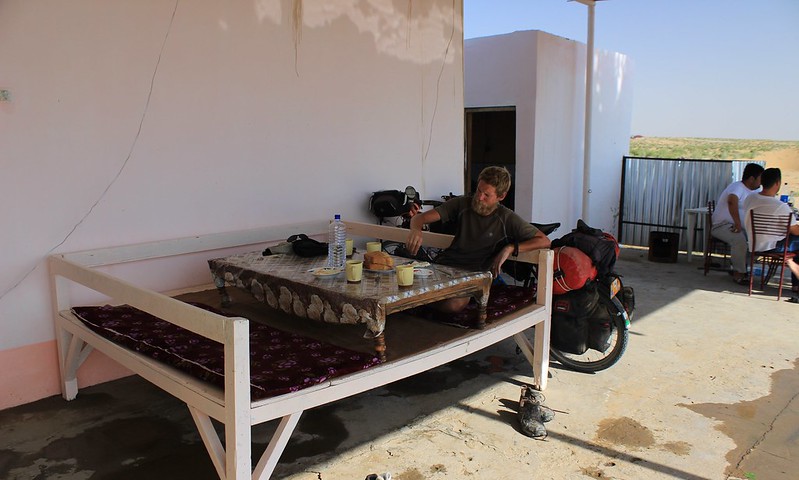 The good news is that the route is littered with great characters. On my second night in Kazakhstan I was riding late in the evening in an attempt to beat the sun, when two dogs suddenly exploded out of a ditch to my right and started bearing down on me, barking their arses off. I jumped off the bike and gave them some stern words (As I'm now brave enough to do. It DOES work!), and their owner came stumbling across the dusty field to introduce himself, and call his dogs off. He was actually a security guard of sorts, living in a small shack by the roadside for two weeks at a time, watching over the construction equipment through the night. We sat in his shack drinking tea and chatting; whilst Derek had no English and I no Russian, his communication skills were some of the best I've encountered. We somehow managed to have a fairly meaningful and lengthy interaction before I cycled on into the dark. 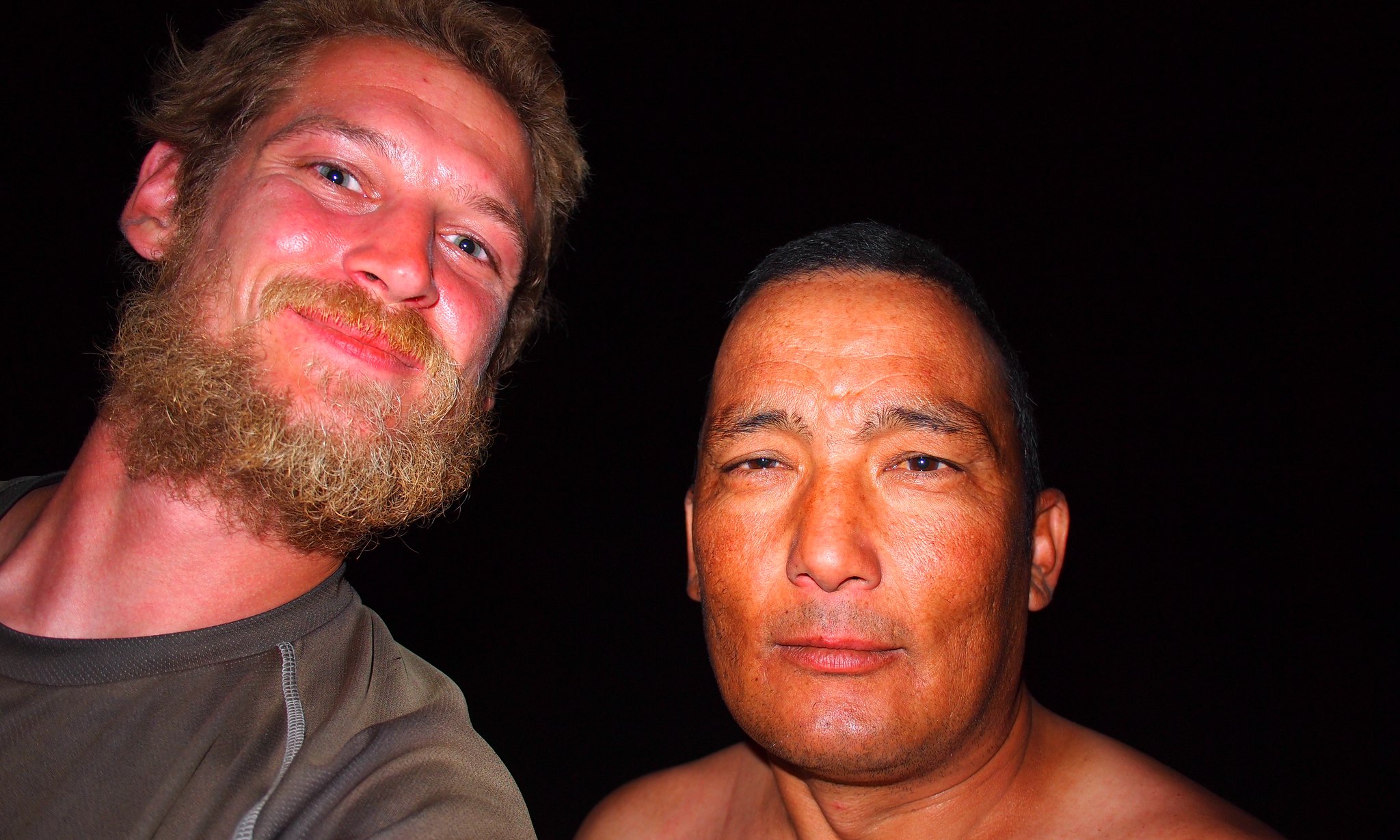 Getting near to the end of a day's ride I was looking for somewhere to eat and get water, I stopped to ask a couple of guys in a parked car and they led the way to a truckstop. Once inside they ordered food, a load of bottles of water and a pot of tea. They ate and drank quickly, arranged with the owner for me to camp around the back (guarded by his pack of enormous canines) and got up and left. When I went to pay for my drinks and meal I discovered that the two strangers had paid for everything before deserting me. If by chance you're reading this, thank you very much chaps. 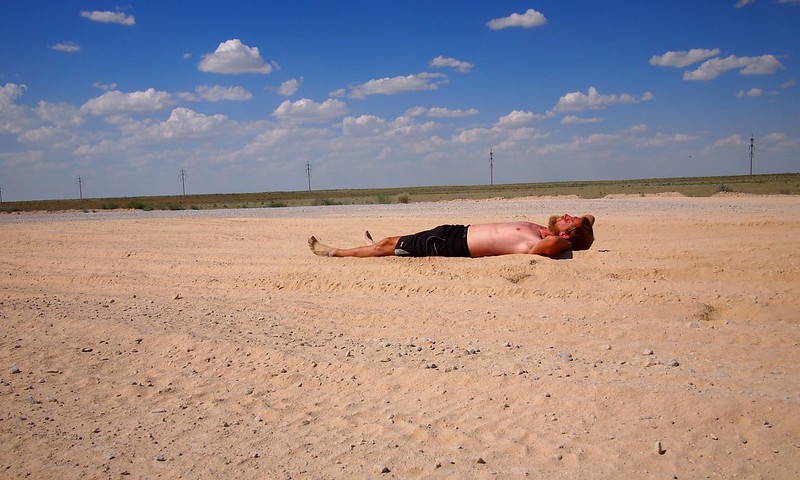 Crossing the Uzbek border I knew I would have a few days before reaching the first town. And I knew that in that town there was no guarantee of an ATM. This meant I would have to do something I have previously managed to avoid; change money at a border crossing. The exchange agents that hang around border crossing points have unfavourable rates of exchange and a tendency to make mistakes or simply just rob you through sleight of hand. I went in prepared with an exchange rate acquired through Google. The number the guy wrote down to start with was an entire decimal place too short, I pointed it out and he drew an extra zero on the end. This was going as expected... I told him I'd talk to someone else as there were plenty of other changers around, “Sorry, mistake, mistake!” he replied. I kindly asked him not to make more mistakes and continued negotiations. The numbers he was writing was actually now far larger than I was hoping for, which made me think I'd entirely cocked up my maths. I changed up with him anyway and left, not knowing if I'd been ripped off or, somehow, managed to fleece a money changer. It turns out that, through pure chance I'd changed money at the black market rate (Around 4200 to the dollar), whereas the others I spoke to had got the bank rate (Around 2700 to the dollar). Bargain! Having entered Uzbekistan and acquired a wedge of cash, I was ready to hit the road and was hopeful that this road would be smooth tarmac. It was an improvement over Kazakhstan, for sure, but then, cycling on the moon would probably be better than Kazakhstan. 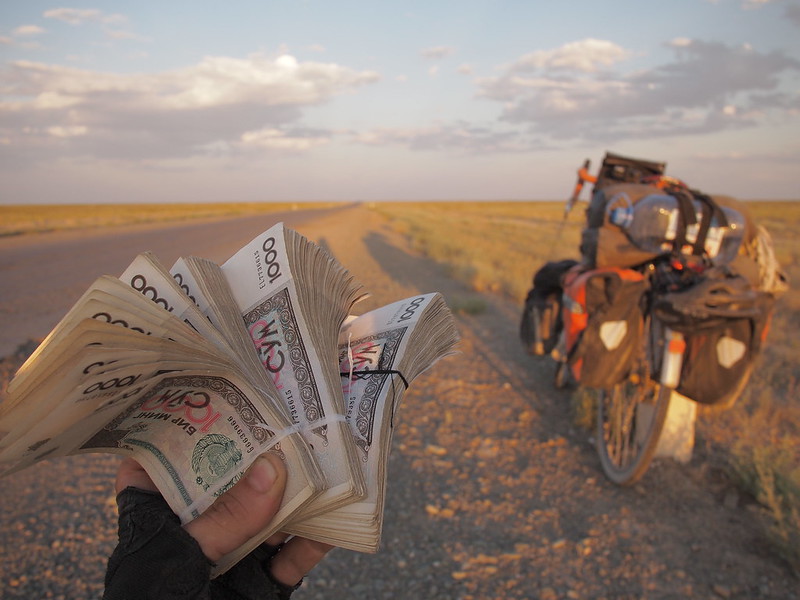 I had been intent on meeting my registration requirements this time and from what I understood, Uzbekistan's were quite serious. This one is a full blown police-state, so best not to get in trouble with the authorities. I'd asked at the border where I might find a hotel to register from and how long I had to get there. They didn't really have answers to either question but three days was general consensus. Three days later I rode into the first real town and enquired, “No hotel, try next town”. The message was the same in every town, every day. By day five I didn't rally care about registration, I just wanted a hotel for a bed and a shower; it had been 12 days now! This was emotionally draining, as each morning I was waking up thinking it was my last night sleeping by the roadside, and by the middle of each day I was riding on for another 100km in search of the next town, my hopes of a rest dashed again. 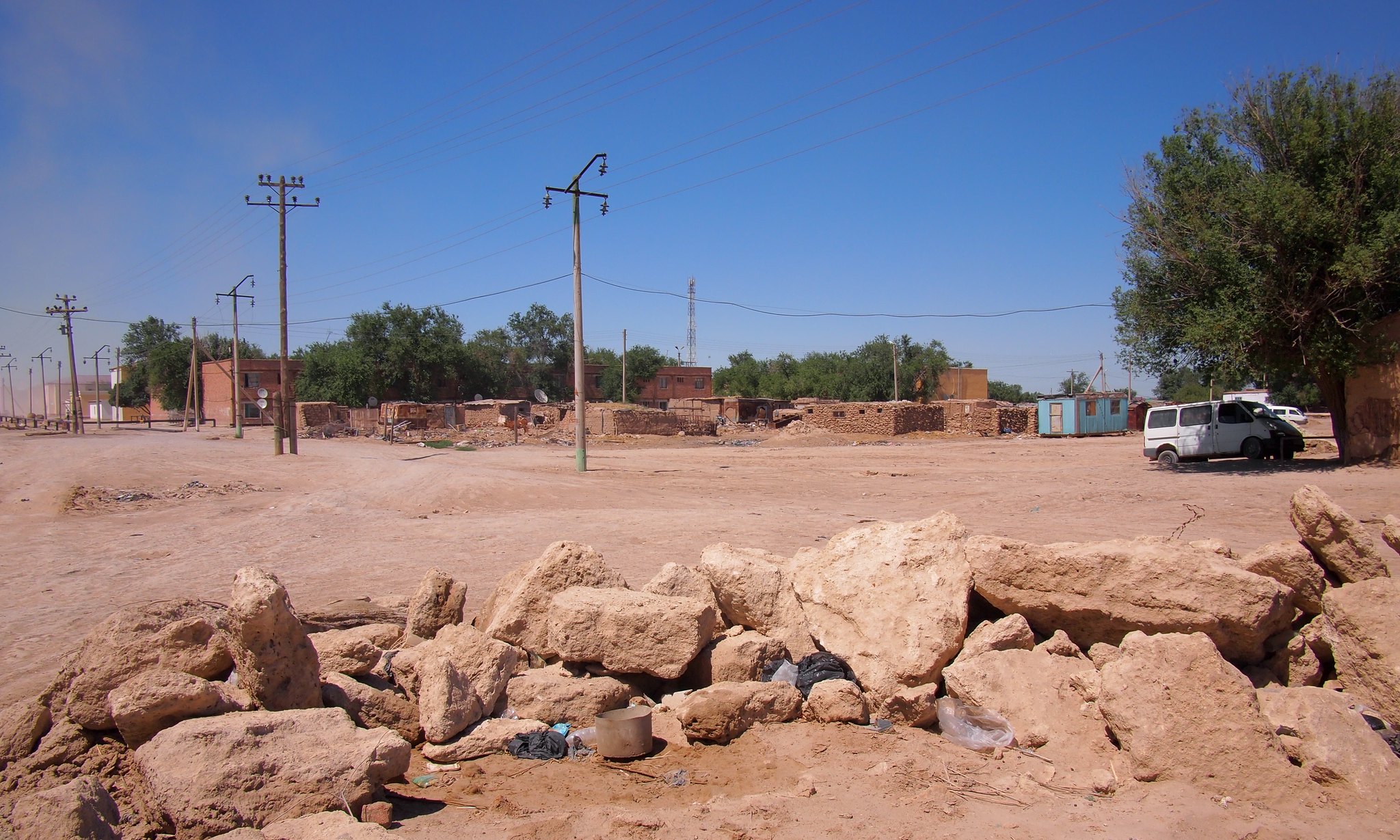 Arriving in Nukus, hotels were everywhere, but all were out of my price range. At the fourth place I enquired with I was told the price was, once again too high, however, there was another option, a yurt in the courtyard at a slightly reduced price. By this time I didn't care where I slept, I just needed to attempt to register my stay. I was lead to the courtyard and saw John, another British cyclist I'd met in Georgia. After my gruelling 12 days, I had a shower, a meal and a lot of vodka. Upon leaving I finally got a registration slip. Almost three days late. I hoped it would be enough to keep the border police happy.